How to Keep Your Brain Young

If your goal is to maximize brain function and avoid dementia or Alzheimers...

The brain is our most active organ.  It is just 2% of your body weight, but it uses 20% of your body energy.  It is also a sensitive organ.  So much so that your body has evolved a “blood brain barrier” to protect the brain from damage from foreign chemicals.

But the human brain was designed (through millions of years of evolution) for a very different environment than we live in.  Instead of late night TV, think 12 hours of pitch darkness on the savanna.  Instead of bacon double cheeseburgers, think foraging for roots, fruits, tubers, berries, vegetables.  The fattiest thing we would have eaten is an occasional nut that we had to pry open, or a fish that we caught.  Of the small amount of fat that we consumed, a might higher percentage was health omega 3.  The sweetest thing we would eat is about the level of a modern carrot.  For our brains to be their best we need to sleep about 8 hours per day and eat a diet rich in fiber and antioxidants, low in harmful fats, low in refined flour, sugar, and industrial contaminants like pesticides, herbicides, and preservatives.  To maximize the shelf life of your brain, eat plant-based foods with a short shelf life.

Exercise and movement is central to proper brain functioning.  The main signal to grow brain tissue is called Brain Derived Neurotrophic Factor (BDNF).  It is mainly only stimulated when we engage in moderate intensity exercise.  For our brains to function at their best, we need to exercise.  Frequently, several times per day.  Less sitting.

Alzheimer’s dementia results from decades of brain-unhealthy lifestyle habits.  Over years, we accumulate damage due to the 4 horsemen of brain aging: oxidative damage, inflammation, atherosclerosis (fat and cholesterol buildup in the blood vessels) and insulin resistance (which likely results from fat buildup inside the cells). 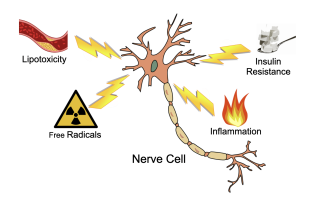 The good news: some experts in the field believe that Alzheimer’s disease is 90% preventable and even partially reversible.  We can slow the progression of Alzheimers and even reverse its early stages by switching to a brain-healthy lifestyle.

Certain supplements merit special mention: vitamin B12 is of vital importance to the brain.  Other B vitamins like folate and thiamine are also important.  Some evidence suggests that the combination of a B-complex vitamin plus omega 3 supplement might slow the progression.

Poster for this Checklist 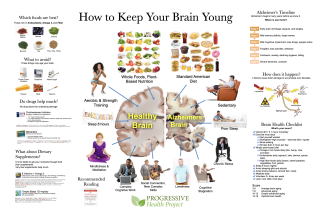 Want a daily reminder of how to achieve these goals? Print out the checklist and put it on the fridge or give it to your physician and ask them for their support.

We are a small organization that hopes to help people take control of thier health. Our work would not be possible without your help.

In honor of my dad

My dad passed away of Alzheimer's and seeing him go through that made me want to do anything that I could do to keep my brain young and healthy. I use this checklist every day to remind myself of simple and easy things I can do to achieve my health goals.

Take control of your health, one checklist at a time.

Sign up for our monthly poster club or newsletter.

Checklist for Physicians to Save Your Patients from Climate Change

We are a small organization that hopes to help people take control of their health. Our work would not be possible without your help.

Made with love by Trolley Web